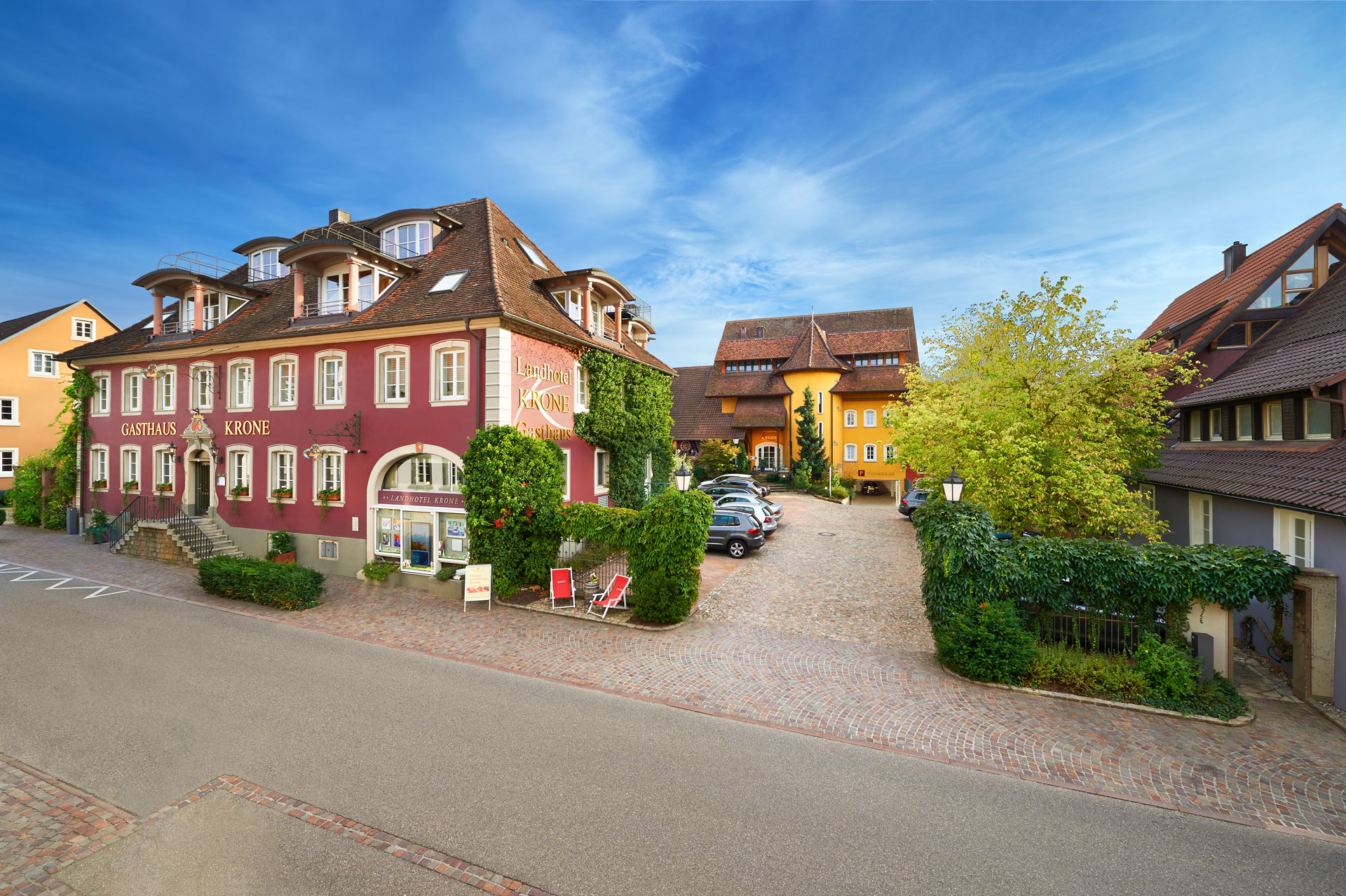 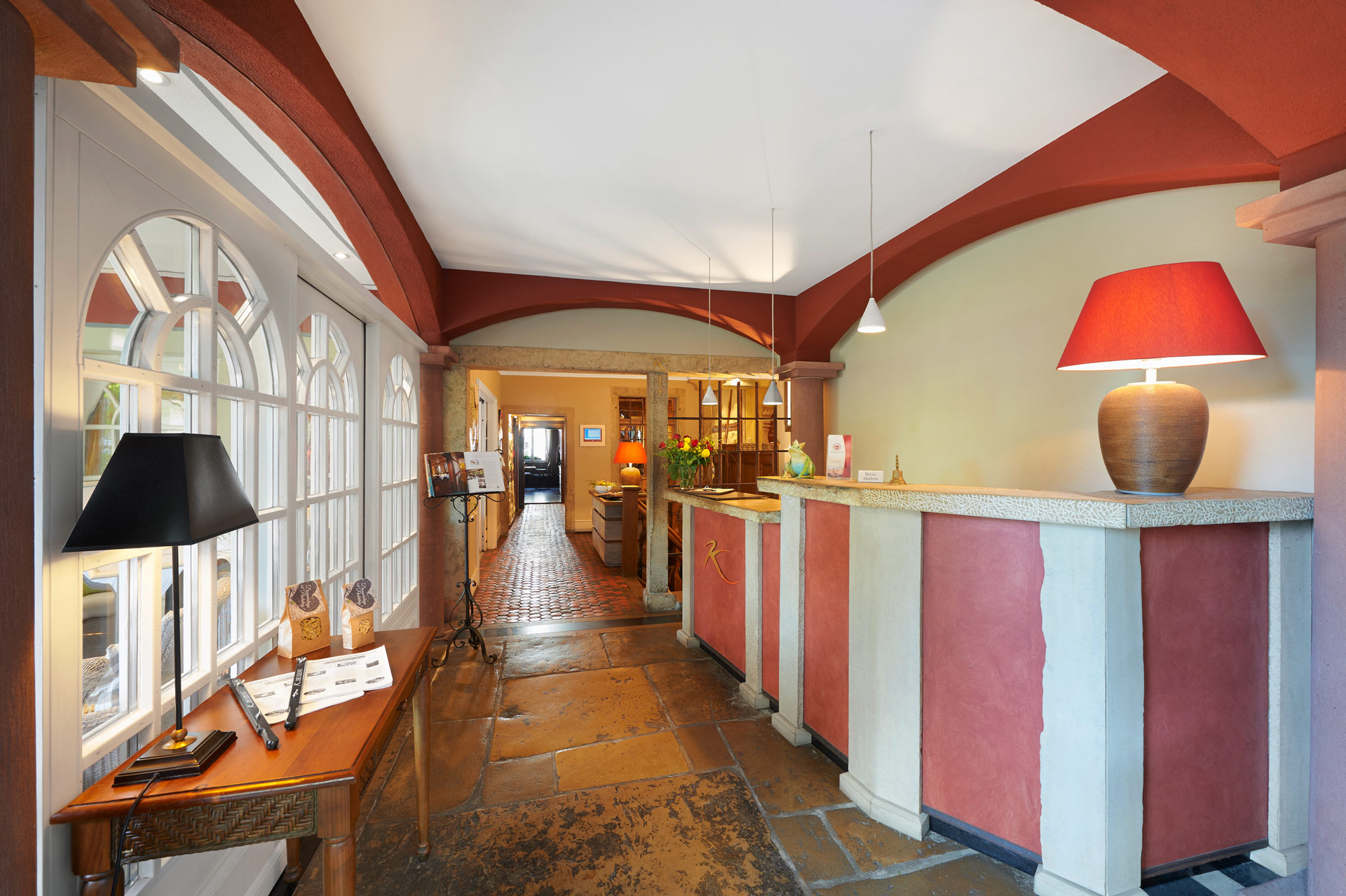 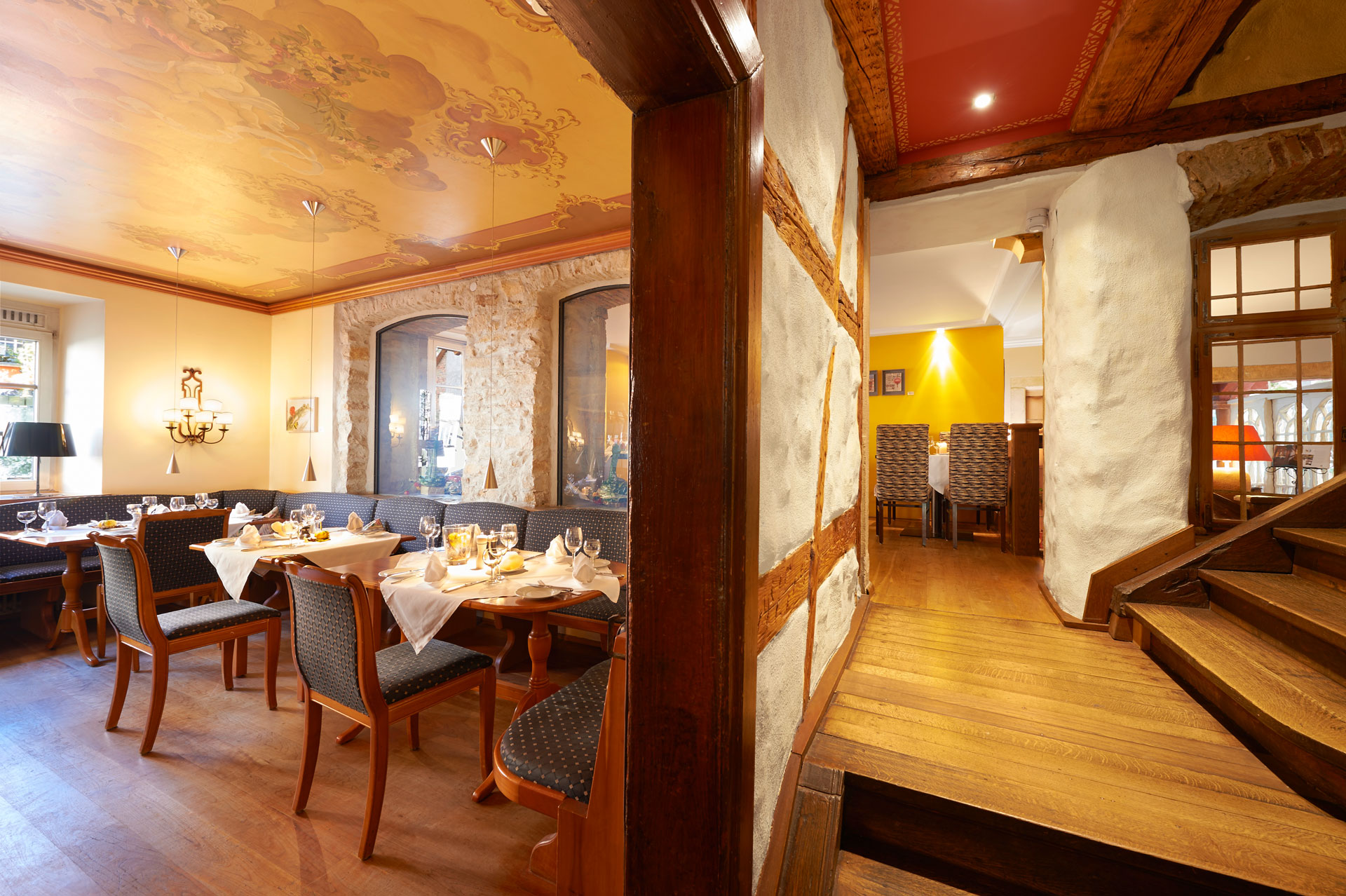 Enjoyment from tradition since 1618

The history of „die Krone“ dates back to the 17th century, or more precisely to the year 1618.

The Gasthaus "Zur Krone", located in Malteserstadt Heitersheim, is one of the oldest hostelries in the region. The earliest records of the Krone, seen in church books, date back to 1618. At that time, during the worst part of the Thirty Years' War, Ambros Späth was Krone’s landlord. In 1659 he drowned in the Rhine and as only girls were born from the marriage of his only son, the Krone was sold around 1660 to Johann Georg Schiitz.

For many years, the Schütz family played an important role in this area. Johann Lorenz Schütz was reeve from 1623 – 1663, his son Anton being his successor until 1699. At that time, the municipal administration was certainly not an auspicious task, under the strict chancellors of Heitersheim’s chieftains.

The first Schütz landlord of the Krone was succeeded by his son, Johann Georg. Georg’s first wife, Regina Bonnin von Hausen bore them a child but tragically died in childbirth on the 29th of August 1660 at the tender age of thirty. Georg’s second marriage to Anna Maria Weißkopf on the 21st of November 1660 saw nine children born. Their son, Georg, took over the hostelry and was also responsible for the post office. He married Maria Anna Neumaier on the10th of January 1700, who gave him four children but she also died at the young age of 33. Johann Georg survived his wife by 22 years. Krone’s next landlord was Johan’s grandson Franz, who entered into marriage with Lucia Steinle of Norsingen on the13th of July 1738, having 14 children together. Franz’s son Georg was accountable for putting a halt to this Krone landlord lineage. He was also a professional cooper, like all his ancestors who were the "court coopers" of the Maltese chieftains for 150 years.

Then the butcher, Joseph Neumaier, bought die Krone. On the 29th of May 1740 he married Maria Anna Schmidle. Seventeen children came from this marriage, seven boys and ten girls. Their son Franz Anton became successor and led Elisabeth Rötheler from Dottingen on the 24th of October 1768 to start a life with him. The landlady gave birth to ten children. This couple rebuilt the "Krone" in 1777/1778, the stately burgher house, as it still stands today. An artistically hewn sandstone lintel can be seen above the main entrance on which a crown throns and the initials of the builders can be read: F. A. N. M. and E. R., as well as the year 1778. On the right, an ox head with horns has also been engraved and above it a meat chopper, the emblem of the butcher’s guild, adorned and surrounded by ornamental engravings. Also in the archway of the courtyard entrance stands a carved capstone with the same initial letters and the year 1778. High above the entrance stands the artfully forged hotelery sign "Krone" which invites you to stop. Franz Anton Neumaier died on the 3rd of January 1806, his wife passed away on the 2nd of June 1815. The construction in 1771 of the guesthouse "Zum Kreuz" probably prompted the rebuilding of the "Krone". Son Franz Anton Neumaier followed as landlord. On the 3rd of February 1794 he married Theresa Maria Schmid. The family had nine children. The mother died on the 22nd of January 1840; the father followed her eight years later.
Son Karl Friedrich was the last Krone landlord of the Neumaier clan, married to Rosa Knobel, the daughter of the Kreuz’s landlord, Joseph Knobel. Six children were born to them: four boys who all died during childhood and two girls. Rosa Theresa became a key owner in Neuenburg and she died at the age of three months. The father emigrated to America and died there on the 10th of August 1858. The mother entered a second marriage in Müllhausen.

A new generation moved into the "Krone". Peasant Josef Anton Dreyer became "Krone’s landlord". Dreyer's ancestor was a native of Wölfliswil in the Fricktal region (Switzerland). He was a miller and settled down there on his wanderings. Born in 1742, he founded a family with Theres Thoma in 1774. The couple educated seven children in Switzerland. Father Markus died on the 3rd of May 1801 at 59 years of age. Frau Theres survived her husband by 27 years and was 81 years old when she died on November 5th, 1828. Only the grandson Josef Anton Dreyer moved with his wife Maria Ehrler into the "Krone". They held a wedding on February 11th, 1833. They had four children. Both parents died in 1886. The successor was their son Josef Anton, married to Wilhelmine Keser von Oberschwärstadt on the 27th of November 1876. They gave birth to three children: Joseph Anton, Julius and Kara. The father died on the 21st of January 1901, the mother on the 3rd of June 1925. Once more the son Josef Anton took over the hostelry. On the 31st of January 1910 he celebrated his wedding with Stefanie Müller. Five daughters were born: Leonie, Frieda, Hilda, Anna and Berta. The daughter Frieda married August Thoma, native of Wittental on January 23, 1951. A new dynasty arose and the new Krone’s landlord bore the same name as one of her ancestors two hundred years ago.

In November of that year an only child, Joseph Thoma, was born. On February 11th, 1976, he married Christine Gehr, native of Eschbach. From this marriage, three girls came into the world: Patricia, Katharina and Friederike Thoma. At that time, the "Krone" got converted from an agricultural hostelry into a 3 star hotel.

Restauration of the Krone’s vaulted cellar. It still serves as a restaurant today. A covered terrace, "the arcade", was built; the barn was acquired and served as a guest house in the first years.

New construction of the yellow tower house („Turmhaus“) with an underground garage, a quiet garden, an inner courtyard terrace and a meeting room. At the same time, „zur Krone“ was renamed "Landhotel Krone".

Extension of the main house through the artist's storey with comfortable rooms and dormers. A fixed reception area was established.

The Dreyer‘s house was acquired and lovingly, thoroughly restored. Today, it accommodates a flower café, a physiotherapy practice and a top floor rented apartment.

The parents‘ desire for one of the daughters to manage today’s "Landhotel Krone" has come true. A business transfer to the youngest daughter Friederike Cornelia Thoma took place. A wellness house with a relaxation garden and two newly designed wellness apartments were built.

Rehabilitation and expansion of the Krone’s kitchen. On  the 24th of July 2010, Friederike-Cornelia Thoma married Patrick Rottmann, native of Erfurt. A new generation entered the "Landhotel Krone". To date, three children have emerged from this marriage: Kristina-Amélie, Jonathan-Josef-Joachim and Frida Rottmann.